SCIENCE FICTION TO MAKE YOU TO GO “YIKES!” 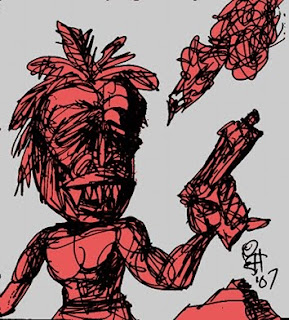 A video clip from an unidentified source:

Aerial view of mountains in a desert area much like that on both sides of the US/Mexican border. The camera flies over an area of thick vegetation. Zoom in. It is an illegal marijuana farm. Bombs are dropped. The plants burst into flames.

Still burning, they begin to walk.

“Helicopters still fill the sky as the sun sets on this Easter Sunday, near the border crossing in Nogales, Arizona. A smoky haze lingers. Tanks patrol debris-filled streets. Overturned, burned-out vehicles block the last of the post-Spring Break/Holy Week traffic that mysteriously erupted into violence yesterday. Bits and pieces of demolished piñatas are everywhere. . .”

“Hijo de la chingada!” said Victor Theremin, science fiction writer and consultant to AI manifestations of the Singularity. He looked up from the screen of his Universal Mobile Interface, and focused on his latest intern.

Izzi practiced martial arts moves in front of one of the giant stone effigies on Rapa Nui, AKA Easter Island. She wore only green body paint. She looked like a giant praying mantis. The idea that she could kill him with her bare hands made their intimacies all the more ecstatic. “Me or whatever you’re watching?”

The above is the beginning of my story Radiation is Groovy, Kill the Pigs from the anthology 2020 Visions edited by Rick Novy. It made one sweet reviewer go “Yikes!” But isn't that what science fiction is supposed to do?

That was what it was for back in my Atomic Age youth. But in the Post-Star Wars world, I often heard people say things like, “I love sci-fi because I always know what's going to happen and it never disturbs me.”

Now we seem to be entering a third age, one that doesn't yet have a name, one that has us all looking over our shoulders and wondering when the next bombshell is going to hit. We're entering uncharted territory, folks -- and it's crashing down out of the sky.

Or as the conquistador Cabeza de Vaca said: “Such is the power of necessity that we should thus hazard a turbulent sea, none of us knowing anything about navigation.”

For me, science fiction has never been about escapism, but about helping you be ready to live in a world of rapid, unexpected change, to face the unknown on a daily basis. It is a survival tool for living in the future. And the future is always closer than you think.

That's how I felt when I was a kid. Godzilla and hordes of atomic monsters helped us grow up knowing that a nuclear war could vaporize us at any moment. Marvel comics taught us that radiation could be a groovy thing. That which blew our minds only served to make us stronger.

Though I do understand needing a break from the nerve-shredding stress-storm. As Victor Theremin said, later in the opening of Radiation is Groovy, Kill the Pigs:

“Even I need quiet and solitude every now and then. It helps me sort through the chaos so I can reconstruct it into something even more amazing.”

Izzi walked over to one of the effigies and started to climb up to its chin. “Science fiction.”

“For lack of a better term.” 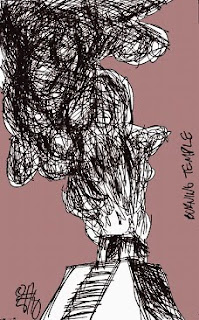