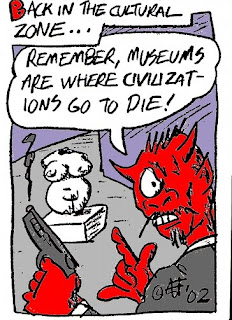 My career as a commercial artist began with Mr. Velasco's Haunted Psycho House. He was a Spanish teacher at Edgewood High back in West Covina, and an old-fashioned Mexican American who took the word Chicano as the insult it was originally intended to be. He loved to exploit his students. The Haunted Psycho House was his way of doing it around Halloween.

As the cartoonist for the school paper, I was suggested to him to design the ad to appear in the San Gabriel Valley Tribune. Oh boy! My first professional art job! And he promised to pay me ten dollars! I did everything thing according to Mr. Velasco's specifications, including the skeleton with the axe through the skull and the visible fangs on the bats. I was trying to be as pro as I could be.

It was a thrill seeing my art in the local newspaper. But weeks went by, and no sign of that ten dollars that Mr. Velasco promised me. When I approached him in the hallway about it, he said he was busy, in a hurry . . . I began to wonder if I would need to borrow a switchblade to get my money.

Eventually (without a switchblade), I cornered him in his classroom, blocking the door.

“Uh!” He patted his own pockets. “I don't have my receipt book!”

“I need the money now!” There was a science fiction convention that weekend.

He found a piece of scratch paper, hand wrote an impromptu receipt, and had me sign it. Then, he pulled out his wallet, fished out a dogeared, moth-eaten ten dollar bill, and handed it to me. 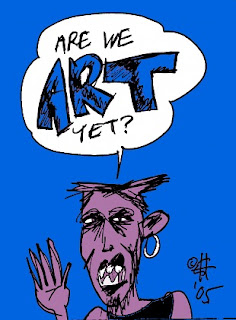 Later I told this story to fellow student. Instead of being sympathetic, he beamed and blurted: “Wow! You got ten whole dollars just for drawin' a pitchur!”

For years afterward, I tried like hell to become a successful commercial artist. I had some minor success with some cartooning and illustration, but found that, in the long run, most clients were a lot like good ol' Mr. Velasco when it came to paying for artwork. Some of them were even worse.

I put it all on a back burner for a couple of decades, and just did surrealistic psychograms for my own amusement -- and to keep my chops.

Recent technological developments have made self-publishing more viable than ever before. I'm getting into that because I have all these books and stories lying around. Being an artist/cartoonist can come in handy – I don't have to hire myself.

Then a friend pointed out that a lot of writers who are getting into epublishing are having a hard time getting cover art and illustrations.

It took a while for it to sink in, but soon I realized that there is a growing, viable market here. And one where I have lots of contacts.

If I could figure out a way to quickly generate usable images, using a method similar to the way I create my blog illustrations, I could sell the rights at reasonable rates.

You like this monster drawing I scanned from my sketchbook? I could put the title of your book and your name right there! You want bats with visible fangs, too? Sure, why not? Why don't we throw in a skeleton with an axe through the skull, too?

Of course, if the authors want me to peruse their entire manuscript, meditate on it, and come up with an elaborate Work of Art, that'll cost more . . . but if I can knock something out in day or so, and get payment comparable to what I get slaving away at an infernal corporate bookstore . . .

There goes my brain, rushing off again. I better get to the laboratory, and do some experiments. Bwoo-hoo-hoo-ha-ha-ha-ha! 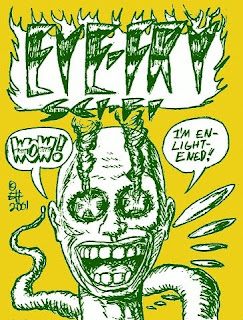