GETTING PUBLISHED IN THE TWENTY FIRST CENTURY 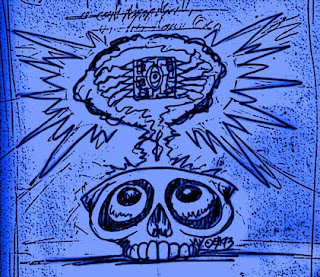 This century hasn't been bad for me as far as getting published is concerned. Especially the last few years, when I got involved with social networks like Facebook and Twitter.

Back in the year 2000, things looked pretty grim. I got a full-time job at BigBoxBookstore, and put writing on the back burner. Writing didn't work as profession, but I was too addicted to completely stop – this stuff keeps growing in my brain, be glad it doesn't happen to you.

You often hear Samuel Johnson quoted that, “No man but a blockhead ever wrote, except for money.” The truth is all writers are blockheads. We strive for the mad dream of professionalism, but something drives us to write -- even if it doesn't do us any good. We will write even if it eventually kills us.

And often it does.

Still, I found that I could get publishe, just about as often as as I did back in the days when I was busting my ass trying to get my stuff out there. A story or two of mine would see print every year. I'd get emails, saying “Hey, Ernie, I'm doing this anthology, could you send me some of that weird stuff you do?”

Once I plugged into the social networks, I found these emails coming more often. I also got in touch with magazine editors who were also interested my work. Last year I published four stories, Hindenburg's Vimana Joyride, Doctora Xlibaba's Datura Enema, Plan 9 in Outer Space (co-written with my wife, Emily), and Radiation is Groovy, Kill the Pigs, and this year I already have two more coming out Death and Dancing in New Las Vegas in Analog and The Great Mars-A-Go-Go Mexican Standoff in Tales of the Talisman.

Seems that getting published is bad habit I've gotten into. I don't think I could write a how-to article about it. At this point, it's part of the way I live. I might as well see if I can make it profitable.

What I can say about this is, the world of writing and publishing is changing. Revolution is probably a mild way of putting it. Traditional formats are changing or dying. BigBoxes are collapsing. The mass market paperback probably isn't long to this world – but then sixty years ago it didn't exist. Things don't last forever, get used to it.

A lot of the experiments we see these days will probably fail. No matter. If you never fail, you aren't trying.

And getting published is a social activity. Hermit writers tend to pile up manuscripts in isolation. You have to go out into the world, interact with people, makes deals. The new technology is simply providing a new platform for this activity.

In 2011 I've decide to do it all more aggressively. Another experiment. I'll let you know how it goes.