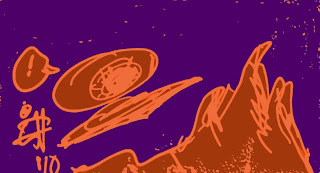 “Getting your dad's pickup? Great cover story for investigating the mystery missle!”

That Victor Theremin! What a kidder! Always pitting a paranoid spin on things. Actually, this road trip was planned long before the mystery missile launch. Honest.

So after watching some bullfight and riot videos, I put on my Homeland Security . . . Fighting Terrorism Since 1492 T-shirt, and off we went, down I-10, past the wooden cut-out of a giant baby, where the zombie cacti flexed their gnarlitude. Stephen King provided a literary soundtrack. We ate commercial burritos that stayed together when you ate them in the car – no edible fallout. The Palo Verde Nuclear Generating Station was either raising steam or kicking up dust into the afternoon air, toward mountains that looks like they belonged to a lost world with pterodactyls nesting at their peaks.

Were the ghosts of Jack Kerouac and Hunter Thompson riding in the back seats? Or was this just what traveling always does to my brain?

The lost world mountains gained a Martian majesty. The car-crushed coyotes made the road into a sacrificial altar that held our civilization together under a sky that was a complex web of expanding, disintegrating con trails -- as it usually is over Arizona. Lots of flying objects in this this sky, even if you can't identify them all -- like that lone blimp, hovering over a small town in the middle of nowhere, as we enter the smoggy haze that meant we were approaching California.

They waved us through the agricultural stop, but the Tejanos before us had their cooler examined. You never know if someone may be trying to smuggle some Madagascar man-eating tree seeds into the Golden State.

We stopped for cool drinks in Chiriaco, next to the General Patton Museum that had a lot of tanks (and a larger-than-life statue of the General and his faithful dog). Next door was a lovely outdoor shrine to the Virgin of Guadalupe. That, the post office, motel, convenience store, and gas station made Chiriaco quite the oasis.

As we switched our soundtrack to the music of Raymond Scott, the high desert mountains merged with the clouds in the sun-blasted haze. Spectacular grey storm clouds filled the sky. If there were any unidentified flying objects, they were invisible in a sky transformed into an upside-down ocean of molten gold as we drove into the setting sun. Almost all the windmills of the wind farm along I-10 spun like mad.

At Mom's house, I used the wrong remote and knocked her flatscreen in the living room offline. Or could it have been some sinister agency trying to cut us off from vital information?

The little set in the kitchen worked. I read Spinrad's Mexica while hearing about people trapped on a crippled luxury liner, along with predictions of cold, windy weather and the discovery of still another species of self- cloning reptiles.

The sky was clear and blue. And there was no traffic noise. UFO influence? No, it was Veteran's Day. I had completely forgotten about the holiday. The L.A. Freeway boogie/rumble was called off. Dad was a veteran. I dedicated the quiet to him.

I went from Spinrad's Mexica to Edgar Rice Burroughs' The Moon Maid -- from one adventure in a bizarre world to another. After all, that's what life is? Isn't it?

I drove the pickup all the way pack to Phoenix, playing radio roulette. I let oldies time warp my brain as I drove across the SoCal of my youth into the desert of my current life. A ranchera station played a mix of traditional songs and narcocorridos. When “Cucurrucucu” came on I recalled the funerals of my grandmother and father and cried shamelessly.

The only flying objects were black, had feathers, and somehow could fight against the powerful winds.

Later, a lone helicopter hovered over mountains that were painted beyond psychedelic by the setting sun.

Victor grilled me before I had a chance to decompress:

“Learn anything about the missile?”

“So now that ya got a pickup, what are you going to pick up in it?”

For now, I drive my pickup, with my phantom co-pilot, and feel stronger than I have ever been.