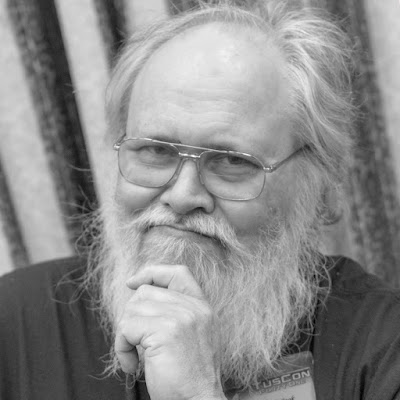 That’s right, there’s an obnoxious exclamation point in the title. Like a command, or a battle cry. I’ve been around writers most of my life, and have long been appalled by what happens to them as they get old and die. Rick Cook was another writer whose health began to fail him, and eventually stopped him, just as he was beginning to achieve a long fought-for success.

The cruelest thing is they usually get forgotten after they die. Wait a few years after the obituaries, then look for any sign of them. Most of us do not become immortal.

I first met Rick on one of my many trips to Phoenix while romancing Emily Devenport, who knew him from a local writer’s group. He thought my crazy ideas were interesting. I was impressed by his being able to make a living as a writer.

Granted, like most full-time writers, his money came through nonfiction, journalism and articles about computers and high technology, though, as he said on his Linkedin page: “Okay, I'll write about anything they'll pay me for.” 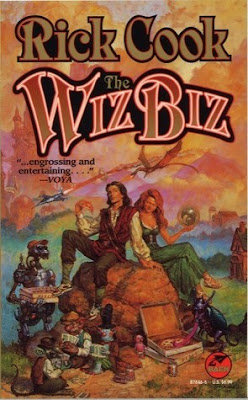 It was a hard, crazy life. He was always scrambling for gigs. He worked odd hours, round the clock, mostly at night.

Sometimes Emily and I (after I moved in with her and we eventually got married) would join him at a Denny’s that would serve as a second office for him. He’d order an IV of iced tea, making the waitress laugh (they would just keep the glasses coming), and have a lot to say about writing, the weird state of the world, and otherwise being the personality that made him a fixture in fandom. He would also listen to our struggles as two broke, but publishing, writers. He was a friend, mentor, and cohort. Often these sessions would go on until dawn.

They eventually evolved into the Full Moon Club–an informal gathering on those moonlit nights because Rick’s wife Pati would be holding Wiccan meetings at their house, and astronomer/writer Peter L. Manly (he died a while back, anybody remember him?) couldn’t observe the heavens when the moon was up. Later we were joined by G. Harry Stine, Michael Stackpole, and some fans and aspiring writers. 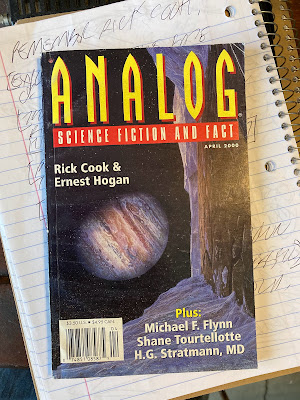 It was fun and didn’t last very far into the 20th century. It also gave Emily and me front-row seats to Rick’s fiction writing career.

It started with a multi-book deal with Baen Books. Out of this came Wizard’s Bane, the first of his popular Wiz Zumwalt series, Limbo System, and my personal favorite Mall Purchase Night. He also sold stories to Analog and a few other markets, most of which can be found on the Rick Cook (writer) Wikipedia page.

Oddly enough, one Analog story not mentioned there is Rick’s collaboration with me, Obsidian Harvest from the April 2000 issue, and The Year's Best Science Fiction, Eighteenth Annual Collection. I’m in eternal debt to Rick for getting me into Analog and have to admit that the story was mostly his–I was along for my knowledge of pre-Columbian cultures and helping with the surrealistic dream sequences. It also gave me insight into Rick’s eccentric writing process that was influenced by being a reporter working with word processors: He would start with notes, ideas, scenes, usually not in order, later there would be a lot of cutting and pasting. My writing has been affected by it ever since.

Obsidian Harvest is a great story. I’m going to do what I can to get it back in print.

Meanwhile, I struggle along with my own writing career, as I get old, too.

Thanks for the conversation and the inspiration, Rick. 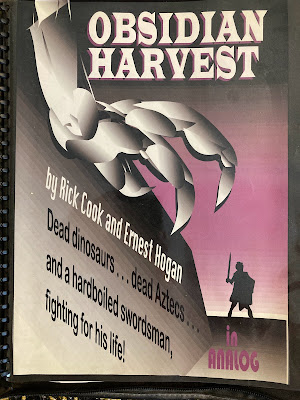