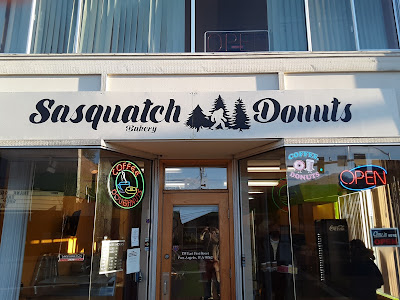 Washington is Bigfoot country. The image is everywhere, painted, carved and, nowadays, wearing masks. We got breakfast at Sasquatch Donuts and saw him emblazoned on a van.

I'm beginning to think of the entire Northwest as Sasquatchlandia. 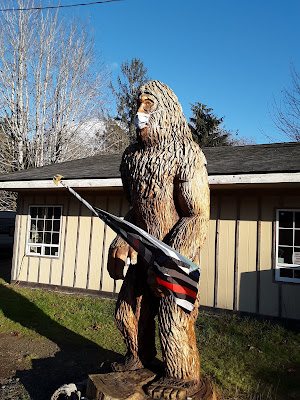 Though as we headed for Olympia, still on the 101, totem poles gave the American yeti some serious competition. A relatively small one in front of a Jamestown S’Kallaam Tribe center had a thunderbird on one side and an eagle on the other. 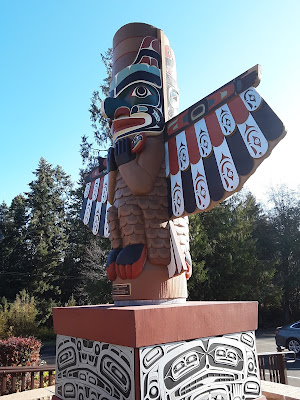 The 7 Cedars Casino was a totem wonderland. They were everywhere. Emily and I went wild snapping pictures. Which was kind of frustrating, because of their size they are hard to capture in one shot. They are also so rich with visual information that you don't get it all. They were made to be lived with, not photographed. 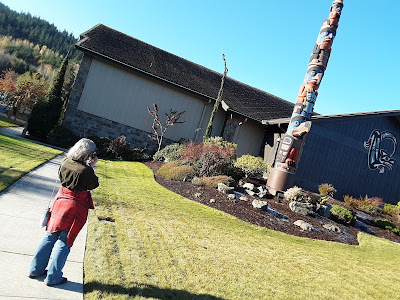 When we drifted into the lobby, the nice guy standing at a podium warned us not to get any people in our pictures. There would be legal complications if such things got on social media. What happens in a totem casino, stays there . . . 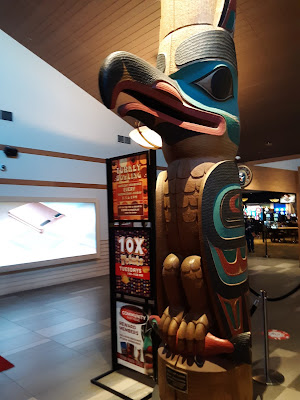 It felt like an alternate universe. Even a Chevron station had totem poles and art. This was Native America. 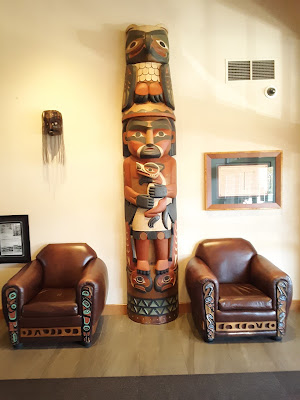 Later, we stopped at older Chevron in the tradition of Western Civilization. The bathrooms were hard to find, so we dropped the drinks and snacks in the car and went back to search for them. When we got back Mike and driven off without us--he didn’t know we weren’t in the car, and took off, lost in the story he was telling. Luckily, we had our phones . . . 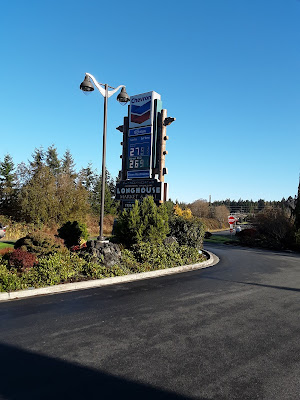 Soon we were back in Oregon for a while, seeing waterfalls and the Columbia River.

We ended up staying at the Motel 6 in Dulles, where I realized that Mike was making sure that we were staying in places where the rooms have their own entrances, so we didn’t have to take Margaret through lobbies and hallways full of air exhaled by people outside our bubble. Unfortunately, especially in colder climates, this isn’t always possible, so we put on her mask and did the best we could. 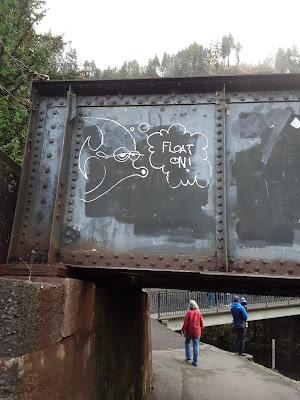 Next day we cut across Oregon on the I-84 heading east to Boise, Idaho. There were fantastic landscapes around the Dulles Dam--the Columbia River Gorge. Found graffiti and avoided the crowds around the Multnomah Falls. Then there were windmills--energy is big business there, powerlines crisscrossed it all. 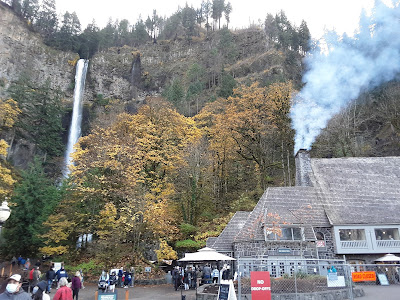 Abandoned structures about twelve miles east of La Grange looked like that set of a snowy western. Passed a Lookout Mountain--wonder how many of them there are? The highway ran next to Snake River until we arrived in Ontario, Oregon. 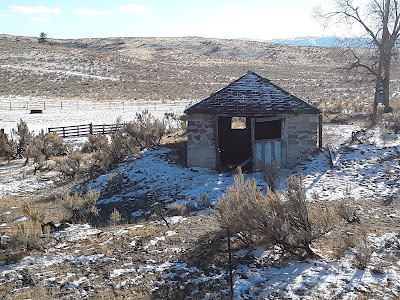 There was a flag flying over a construction site. Thinking, “Ah, America in 2020!” I started snapping pictures, then someone bellowed: “HEY! WHAT ARE YOU TAKING PICTURES OF?”

He was a brown, man-mountain in a hardhat, charging like an angry rhino.

I waved my arms around. “THE FLAG! YOU KNOW, AMERICA!”

He stopped and smiled before I had to accuse him of being a communist. 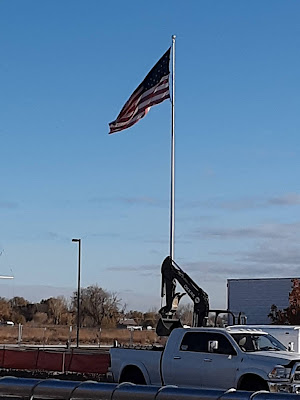 When we arrived in Boise, we found that rooms were under construction at the Howard Johnson. Their office was also closed from eleven P.M. to eleven A.M. Mike reported them to HoJo corporate, and apparently that’s a no-no.

I wasn’t expecting to find Mexican food in Idaho, but we got some at a Costa Vida. This was Mexican done high-tech fast/cafeteria style with Anglo kids working and industrial tortilla press, and serving up assembly-line style.

Boise also bristles with all the usual franchises. 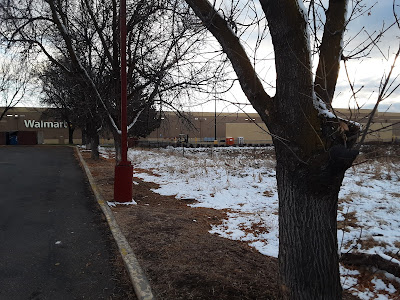 In the morning, we awoke to news of Trump doing chaos, COVID-19 going wild, and rumors of vaccines.

And it snowed as we pulled out of HoJo’s heading for Utah and Wyoming.

Idaho was laid back about masks. No signs about them at gas stations. Maskless people--including military--were everywhere, even though the state was a hot spot.

After a while, the snow on the ground and in the air cleared up. 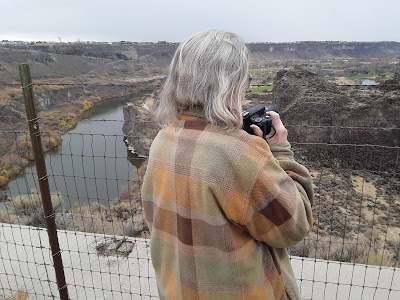 The Snake River Gorge had an impressive bridge with some interesting graffiti. When civilization comes, it brings art, and outlaw culture with it. 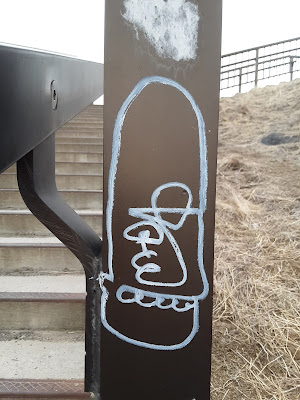 I even saw more Mexican restaurants in Idaho!

Mike insisted that we stop at the Perkins restaurant to get Oatmeal Cranberry Cookies. It was well worth it. Across the street there was a GET THE U.S. OUT OF THE U.N. sign. 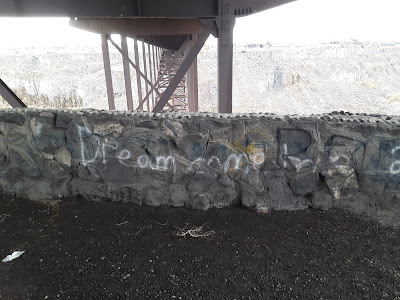 We cut through Utah just as they were issuing a mask mandate.

Then, Wyoming (we would have gone to Montana, but Mike wanted to avoid a blizzard).

We passed a place called Pyro City, that sold liquor and fireworks.

In Evanston it was 25℉, and there was another Costa Vida--this time I noticed their industrial tortilla cooker.

Meanwhile, Trump still refused to step down, and COVID-19 cases continued to rise . . . 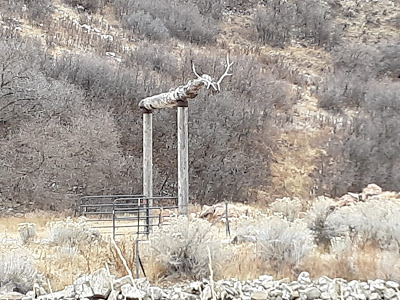