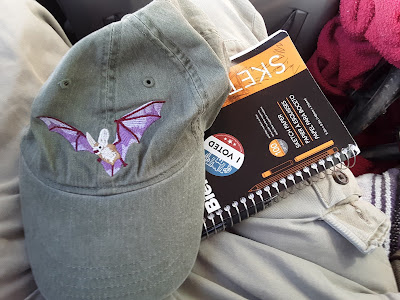 The world was crippled by the COVID-19 pandemic and the election, do why not take my 99 year-old mother-in-law on an other road trip? It's crazy, but in this world, that's only a matter of degree.

It was Emily's brother Mike's idea. Our New Mexico trip with Margaret was successful, and he wanted to spend some more time with her, and show us some stuff he'd gotten to know from decades of driving around America selling his wooden drum boxes. And we'd become experts at pandemic travel, mask wearing, hand sanitizing, social distancing . . . 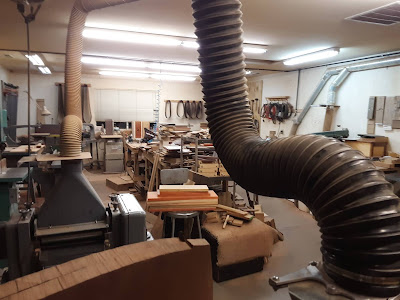 Of course, it started off with a mad dash. I was scheduled for a Zoom panel about Latinx science fiction, so I had to do that, then we got Margaret into the already packed car and headed for Flagstaff, still reeling from the panel. The word "apocalyptic" kept coming up, and it colored the way I saw things.

We dropped Margaret off at Mike's house, and Emily and I spent the night at Mike's studio--a converted barn filled with the machinery he used to make the drums, and other photogenic oddities. Was the painting in the bathroom supposed to be Luis Buñuel, and what happened to the homeless man who painted it? 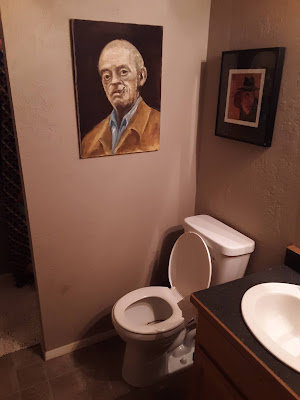 Got up early the next morning, could see stars. It was 30℉, and we could see our breath for the first time in ages. Emily, I don’t think we’re in Phoenix anymore . . .

Soon we were heading to California. Mr. Trout, a plushie, sat on the dashboard to keep away evil spirits. I had my sketchbook on my knee, taking note of the Trump signs by the highway and cerchezing le weird.

The first stop was Barstow, as in, “We were somewhere around Barstow on the edge of the desert when the drugs began to take hold.”

Or as Mike, but put it, “There’s nothing to see in Barstow.”

On the way Mike told us which town didn’t give a damn about wearing masks. 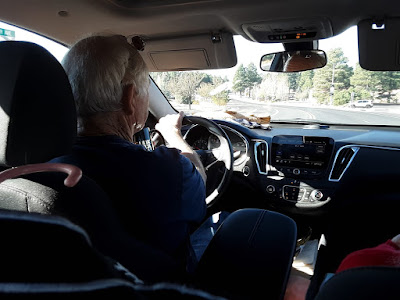 Saw another Trump billboard while passing through Kingman. It was followed by another one about legalizing marijuana. Past Crazy Fred’s Truck Stop among the rock formations that got more complicated as we went on. A different state, a different landscape.

Mike is a master of the Neil Cassidy art of driving while delivering a nonstop monologue of tales of the road. He’d been on the road most of his life, and knew it well. No need to search for America, he knew it better than most people.

Now and then he would stir up some of Margaret’s memories, and she'd tell a tale. 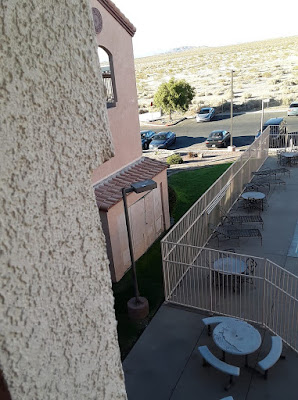 There wasn’t much in Barstow. It looked like an extension of the Metro Phoenix Area, or a chunk of the SoCal sprawl dropped in the middle of the desert. Checking into the Day’s Inn was cyberkafkaesque. The desert stretched off into a seemingly endless two-dimensional void.

The next day was Halloween, and for some mysterious reason Margaret took a disliking to Mr. Trout. 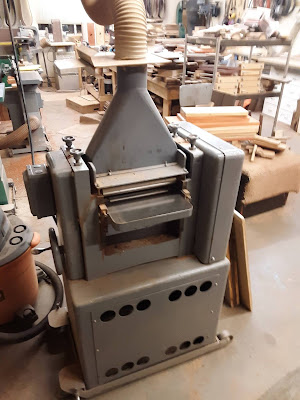 When we passed through a huge windmill farm, Margaret thought we were in New Mexico, in the Very Large Array. Apparently, she had confused Sally Restowski with Jodie Foster.

Soon the windmills gave way to Joshua trees, and we passed through an airliner boneyard.

Mike said that these days, you see more Amazon trucks on the road than any other kind. Pandemic side-effect? World domination?

"Don't get out from under that mountain," said Margaret, and it seemed like good advice. 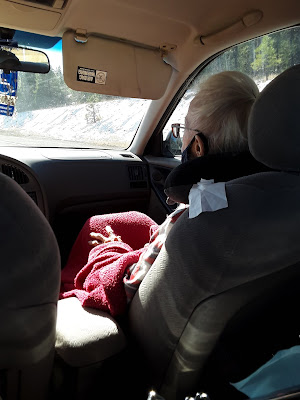 After the desert gave way to farm country, there was a sign: CANNABIS DELIVERED. We were in California, alright. Heading for Bakersfield.

Mike had to hide Mr. Trout under the driver's seat after a while, so Margaret switched to talking about Sally Restowski, and the "international powers" she was involved in.

As we neared the coast the mountains looked like russet potatoes, and were shrouded in mist--the marine layer. We took the James Dean Highway--site of his fatal accident--entering wine country. 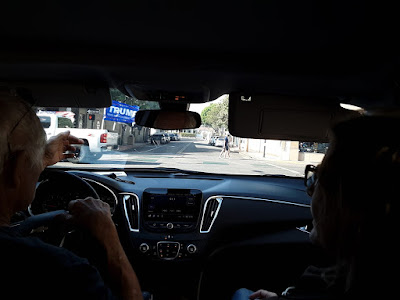 On our approach to San Luis Obispo, a caravan of vehicles flying Trump 2020 flags whizzed past us.

SLO (pronounced "es-el-oh") is another franchise wonderland, like a wealthy L.A. suburb with delusions of grandeur. The hotel rates were high--Mike said, "This is a hundred dollar town”--so we stood in a Super 8 just out of town, near where a 2Mexicans.com truck was parked. And there were homeless guys with signs asking for help at the intersections.

Vehicles flying Trump 2020 and the Stars&Stripes patrolled SLO like an occupying army. 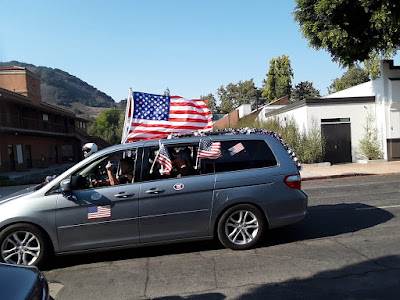 On Saturday afternoon people were lined up outside thrifts shops that limited the number of people allowed in due to COVID-19. Young women wore flamboyant styles and wild hair colors--I couldn’t tell if they were dressed up for Halloween, or if it was just the current fashion. Or the current situation.

Soon the Trump patrols got Fuck Yous and middle fingers from the sidewalks. It got lively, but petered out before getting anyway near a riot. The Trumpers were off the streets by the time we were grabbing take-out from a place called Toñitas. 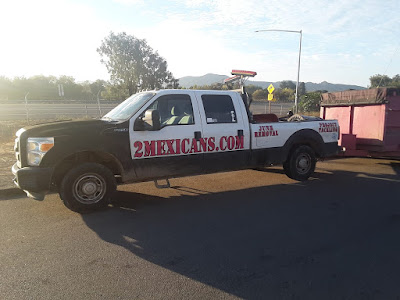