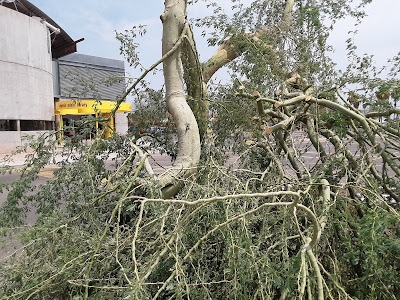 After spring and summer in quarantine, the whole world was going bugfuck. Emily and I needed a vacation bad, even if we had to wear masks and stay six feet away from everyone.

Besides, we had planned the jaunt well in advance. Every year we take Margaret, Emily’s mother, on a road trip to New Mexico, and she was still looking forward to it.

Margaret was also 99 years old this foul year of 2020. Which would no doubt throw a few crunchy complications into the machinery. But then, with people going berserk over having to wear masks, the craziness was only a matter of degree. 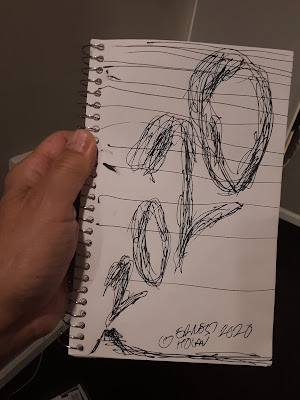 That, combined with the hideous fact that this summer in Phoenix was the hottest in recorded history made us desperate to get out of there.

The previous night's storm tore up the trees on the street between the library where I work and the parking lot of the abandoned shopping mall across the street. Postapocalyptic. I had been overusing that word lately. That along with weird. 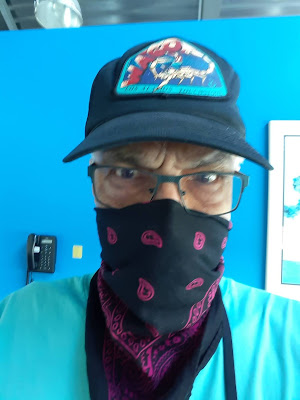 And my mood was weird on that last shift before escape. My bandidoization selfie only begins to capture what was brewing in my brain.

I felt that this one would be different. Not so much, "Whither goest thou, America?" as "America, are you still there?"

Emily and her mom picked me up after my shift ended. It still didn't seem real. Not until we got past the new pop-up communities and outlet malls, where the desert gives way to mountains, though saguaros still studded the vista. 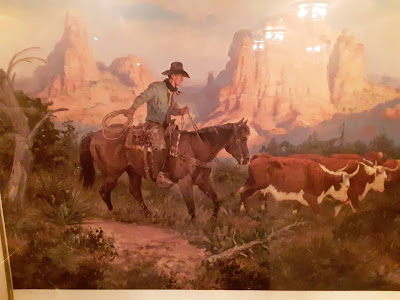 Before Black Canyon City, part of the I-17 has been "adopted" by (as the sign says) URANTIA BOOK. That's the bible of a long-lived UFO cult. I've never seen any cultists picking trash by the roadside. Maybe flying saucers beam it all up.

But on this day, there were no saucers flying over Black Canyon City, only vultures.

On the road we saw occasional vehicles emblazoned with Trump stickers.

“We are getting into Trump territory," Emily observed.

Then, in the middle of nowhere we were engulfed by traffic. Of course, it was Friday, and people still go places on the weekend . . . 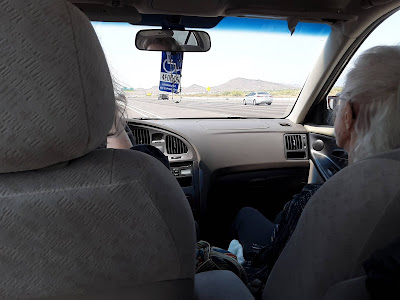 I was amusing myself doing a gonzo expressionist sketch of a cloud when Emily made an utterance that was somewhere between a gasp and a scream, with some profanity. Ahead of us, a rollover car accident happened. I looked up just in time to see the car land on its wheels with its windows shattered, and a dazed look on the face of the woman who was driving.

Emily pulled over, and dialed 911. Several cars also pulled over. The driver was soon mobbed by Good Samaritans. Maybe there's some hope for the human race after all.

The hills were scorched by recent fires, and lightning slashed a slate-grey sky as we approached Sedona. Margaret was cold, as it was under 90°F outside of the Metro Phoenix heat island.

And there were more vultures in the sky.

Or were they condors? 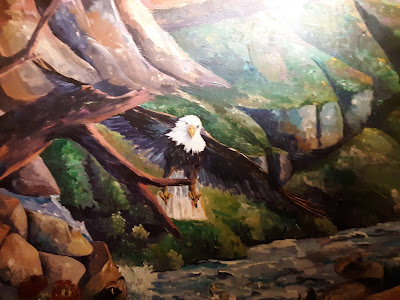 It rained as we entered Sedona, and we took a sight-seeing drive through Oak Creek Canyon.

The streets weren’t as packed as they usually were in summer. The tourists wore masks and practiced social distancing. Shiny, new decorative metal fences divided the streets, and virginal parking meters were installed, but not yet operational. 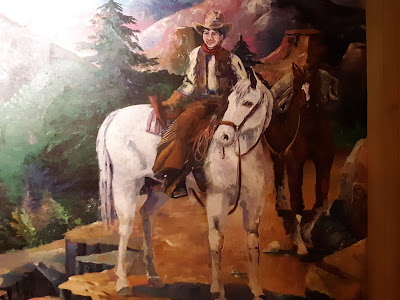 Margaret would have preferred Oaxaca Mexican Restaurant, but it wasn’t wheelchair accessible, so we had dinner at the Cowboy Club. The burgers are so big you almost need to be able to unhinge your jaws like a snake to eat them, and they come with more fries than a rational being would attempt to eat in one sitting. Margaret had a chicken salad with a lot of kale.

At our hotel, the air buzzed with the sound of either cicadas or Them-style giant ants. 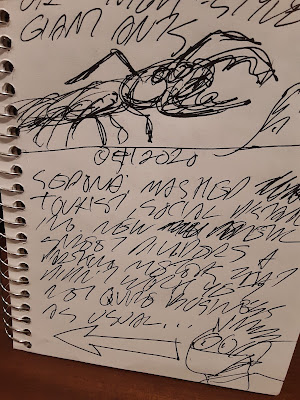 The next morning, we got up before sunrise, and saw stars.

After mochas and latte, we did another pass through gorgeous Oak Creek Canyon, into the sun, onward to New Mexico.

Soon we were on the Navajo Rez. Signs warned about COVID-19. Older signs were updated with bright new red and white OPEN stickers. 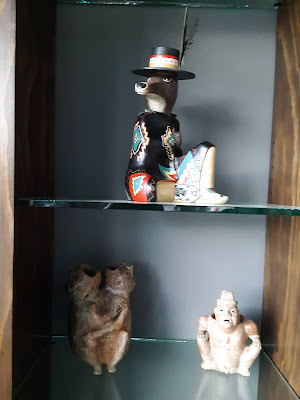 In this new environment, Margaret was too hot. We had to crank up the air conditioner.

Then it was bizarre rock formations, with occasional graffiti-covered, abandoned tourist straps, a coal plant, hogans, and fake plaster tipis. And a sign declaring KEEP NM IN BUSINESS. 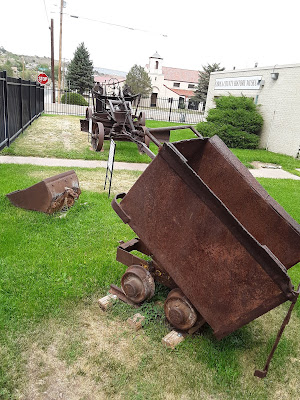 Grants, a one-time uranium-mining town, I’m happy to say, is still as postapocalypitc as ever, with its crumbling Atomic Age decor. I tend to see travel as research, and places like this get the sci-fi bubbling in my head. Filmmakers, this is the locale for a low-budget masterpiece.

Especially if you have to remind yourself to put on your mask before exiting the vehicle.

After getting waved through a sobriety checkpoint (is drunk driving a big problem during the pandemic?) I took photos that will be useful in the sci-fi business. 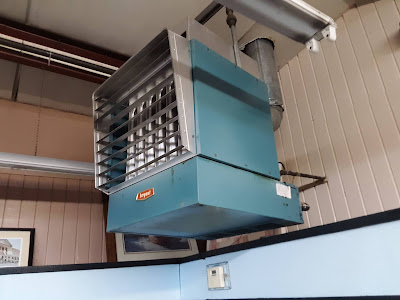 I also got one of an anti-mask signs in front of a thrift store. 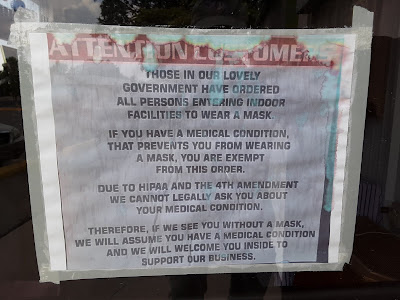 Later we drove across the bridge to Milan, to get pick-up from El Ranchero Cafe. 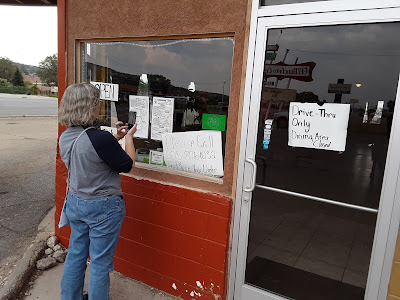 It was a glorious 57°F the next morning.

Watched HLN in the morning. We only watch cable while traveling, and it’s always like dispatches from another world, especially now. What are all these online get-rich-quick schemes? California is on fire. Two hurricanes are closing in on the Gulf Coast. There are more protests. Trump was slated to speak on all four days of the Republican National Convention. Is the story about the new Wonder Woman movie news or a commercial? And then there’s the pandemic news . . . 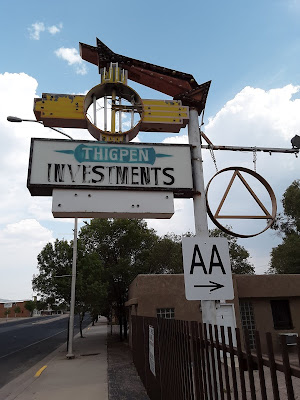 Grants was freshly festooned with some new decorations--satellite dishes with decals to make them look like Indian baskets. Clever, but not really that interesting. I made a note about them, and didn’t bother to take a photo.

Margaret was feeling better by this time. She was talkative, and got into the car by herself.

At the Allsup’s gas station at the edge of town, an old, masked vato pedaled by, the radio bungee’d to his handlebars playing Norteño. 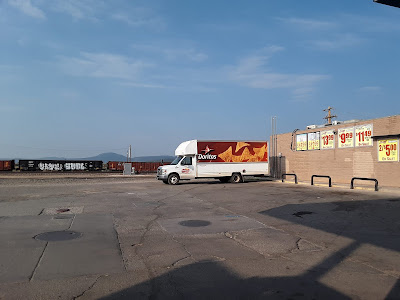