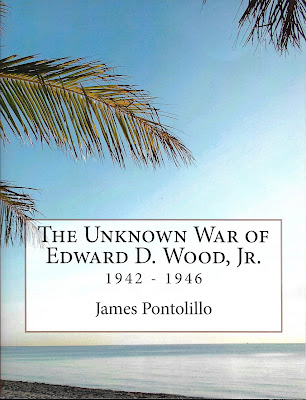 Some Ed Wood fans will be disappointed with James Pontolillo's The Unknown War of Edward D. Wood, Jr. 1942–1946 because the myth of Battle Eddie, Fighting Transvestite, is debunked. The image/story of Wood as a U.S. Marine going into battle with a red (or was it pink?) bra and panties under his fatigues is too appealing to be true—always a clue that something is amiss. He changed the narrative to make a better story. That's what writers do. Even with our own life stories.

We have a lot in common with Walter Mitty, and Baron Munchausen. It is the nature of the beast.

After all didn't Harlan Ellison write a novella called All the Lies that Are My Life?

I'm actually amazed that people keep asking us to write our own bios. After a life of building a story-making machine in your head, it kicks in even when you aren't doing fiction. It's hard to resist your craft. And a little tinkering can make it better . . .

People keep saying I lead an interesting life. Maybe. It doesn't always seem that way when it's happening, but I know how to tell it to make it sound, well, like fiction.

All this doesn't mean that Unknown War isn't a fascinating read, and a valuable addition to the Ed Wood bookshelf. It fills the gaps in the story, and even makes it more interesting. Pontolillo used, and reproduces news clippings and Wood's medical and military records, and truths about the man, and World War Two, become self-evident.

All the mundane documentation. The military is good for that. They also documented Wood catching filariasis, that was cured before it caused elephantiasis, and his getting syphilis from a prostitute in California.

It turns out that Wood was clerk in the Marines, and never was in combat. Wars are mostly paperwork, or I suppose these days they'd say data entry. Office equipment is just as important as weaponry. Non-combat veterans tend to feel shame over their contributions, but they shouldn't. They did their part. They should be honored and thanked for it.

They also tend to tell tall tales about their service.

Actual combat vets don't, and it's hard to get them to tell their stories.

You can't actually blame guys like Wood for embellishing their experiences. He did lose his front teeth in the war, and saying it was the result of the rifle butt wielded by a Japanese soldier sounds better than the reality of getting injured during a ritual concerning his first crossing the Equator. And telling the Battle Eddie myth probably came in handy when people found out about his cross-dressing.

Besides, if you're going to make movies, write books, and become the Patron Saint of Creative Misfits—I imagine that by the end of this century, we will see a religion that worships Wood, along with Bela Lugosi, Tor Johnson, and Vampira—you can't just accept the ordinary, in your work or your life. 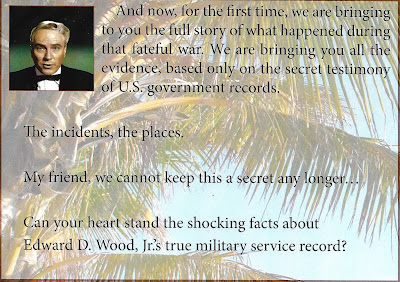