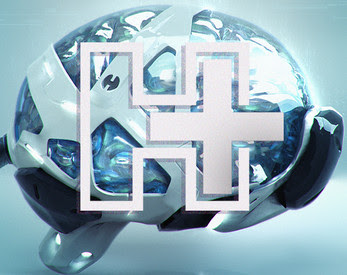 I’m always on the lookout for science fiction from outside the Norteamerico English-speaking zone. Sci-fi pretends to span galaxies and has been flirting with Chinese imports and Afrofuturism, but in reality most of it is still by and about white people who are a fraction of the U. S. of A. How do people squeeze their minds into those cramped, little worlds?

So I decided to give H+ incorporated, the first novel in English by French author Gary Dejean, a go.

I’m also curious about what Europeans are thinking about the future, even though I’ve started to think of cyberpunk as an artifact from the twentieth century, but then these days it’s becoming a short term for the expanding world of transhumanism, and other developments.

H+ incorporated delivers the c-punk goods. We get humans incorporating technologies into their bodies--we might even say their souls--and young people struggling to survive in dystopian future, that shows the cyberculture is becoming global and there is a lot of resentment and anger about the mess the older generations (mine included) have made of the world.

There wasn’t any of the Francofuturism I was hoping for, but it is implied that the young people of France have a taste for marijuana as well as angst.

Also, cyberpunk that goes back to good ol’ 1984 has developed from a revolutionary movement into a venerable, even respected genre.

Dejean does give it a fresh slant, fusing transhumanist body augmentation with fast and furious action, and a gorehound sensibility that moves at a pace that will satisfy readers who grew up playing video games.

I admire the professionalism of it, even though I had some minor gripes, but then I read in the author bio that H+ incorporated was adapted from a screenplay that Dejean is trying to get produced. Again, professionalism.

What I took for lazy writing--characters who are only referred to as the rasta, the Latino, and the Japanese are questionable in a traditional novel, but common practice in screenplays. That and setting it Manila, in the Philippines, but not providing details to make the reader feel it is screenplayese.

This isn’t a traditional novel, but I do love the novelistic detail. It makes for a better reading experience.

Gary Dejean is writing for the brave, new improved world. Old farts like me should pay attention.