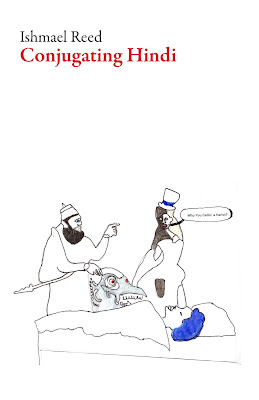 Sometimes I think Ishmael Reed is the only person paying attention to what is really going on. His new novel, Conjugating Hindi, a satire of the world during the Trump--I mean, Kleiner Führer administration, is dead-on hilarious and scary as all hell. Does the job that science fiction should do, but usually fails at.

And what is that job? Why, it's taking a look at current changes, giving us clues to where it’s going and what to do about it. (Yeah, some people say that’s more speculative fiction than, sci-fi, but who goes to a bookstore looking for spec fic?)

This one is right on the cutting edge, set in 2017, now the sudden past; it’s almost a new kind of journalism, beyond gonzo, which is so Twentieth Century. This makes it an alternative universe, one that defines the present, and lays the foundations for the future.

We also get historic and myth figures appearing in dreams. Magic realism, if you will.

As it says on the back cover blurb, this is Reed’s
“global novel. One that crosses all borders.”

Global. As in the whole planet. Not just the cultural ghetto skewed to a New York/Washington D.C. axis that kicks and screams when it becomes obsolete.

Delusions like that don’t die easily. But then that’s the point of most of Ishmael Reed’s work.

Sometimes it seems like wild fantasy, but the outrageous things that happen in Conjugating Hindi’s war with India have already happened in other wars. If you think the news is fake, what about history? What are we doomed to repeat?

Here emerging conflicts are brought to light, along with the fact that the answer is for people who disagree to come together, talk, argue, even fight, as they struggle to figure it out.

Afrofuturists take note, buy, and read. And even though I’ve said it before: Afrofuturism is just a reboot of Reed’s NeoHooDooism.

We need this sort of thing to survive the world that Kleiner Führer--I mean Trump--is making.