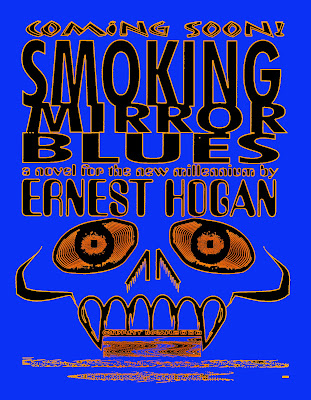 To celebrate the new edition of Smoking Mirror Blues, I shuffled through my mound of battered sketchbooks, and ran across the stuff I did for publicity for the original edition. 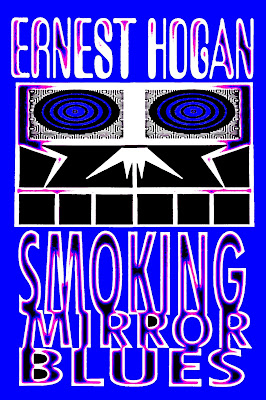 Suddenly, another one of those creative lightning bolts hit me. I was going to need art for my own social media publicity campaign. These files were generated (I had Corel Draw at the time) in black and white to be flyers that never got made. It was 2001, the War on Terror had broken out, my wife and I had just moved into a new house and were working full time at Borders, not leaving much time for conventions and such niceties. 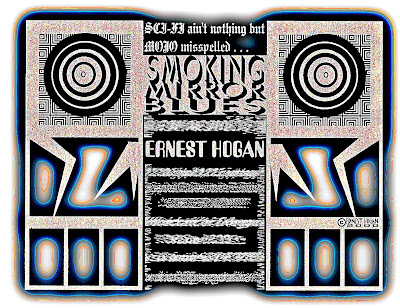 So I ran 'em through GIMP and colorized and further augmented them, along with the cover of my self-published ebook. I love fooling around with art and/or technology. Especially when it gets wild and woolly in spite of itself. 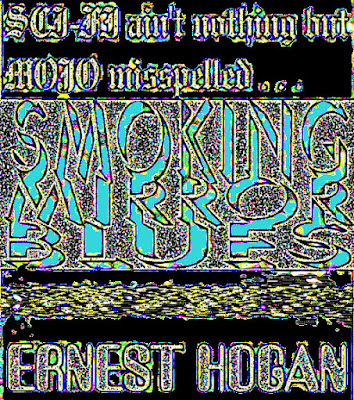 I also did some clipped, cropped, colorized, and distorted pieces, because—yes, dammit!--sci-fi ain't nothing but mojo misspelled.

And half of a Tezcatlipoca face can be a portrait, a landscape, and a starscape at the same time, as well as an homage to Max Ernst, and a reminder that all literature is space opera because the entire universe is inside outer space.
at 12:00 AM