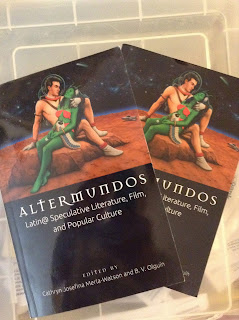 These are my contributor copies of Altermundos: Latin@ Speculative Literature,Film, and Popular Culture edited by Cathryn Josefina Merla-Watson and B.V. Olguín. It features my artwork and “Chicanonautica Manifesto”--in which I declare that “Chicano is a science fiction state of being”--plus Daoine S. Bachran's “From Code to Codex: Tricksterizing the Digital Divide in Ernest Hogan's Smoking Mirror Blues” and other essays that mention and discuss my work and otherwise make me look like somekinda Chicano sci-fi chingón.

It's also cock full of stuff that proves that visions of the future and traditions of wild imagination aren't the intellectual property of English-speaking heterosexual white men. I've started reading it, and am hooked. I'm also rethinking my concepts of the directions and possibilities of Latinoid civilization in the 21st century.

Maybe the Intergalactic Barrio is only the beginning . . . 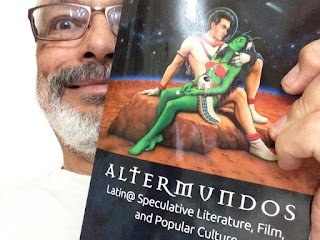