REPORT FROM A BLAZING SPRINGTIME 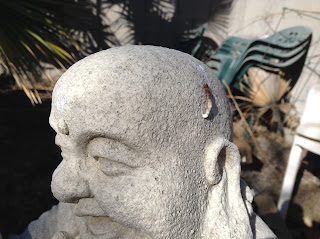 The Metro Phoenix Area has skipped spring, and gone directly to summer. I've broken out the luau shirts, unfashionable cargo shorts, and chanclas. Some folks are saying that it'll cool off again, but it looks to me like we're in for a long, hot summer.

Birds are still shitting on the head one of the Buddhas in our backyard. I don't consider it to a tragedy or an outrage. It's really funny in a zen-like way. I enjoy contemplating the slow disintegration of the bird turds in the heat and ultraviolet radiation.

The other day, not far from our favorite burger joint on Glendale Avenue, around the corner from a bearded homeless person in a dress, we saw a van customized to look like a pig – a remnant of a defunct business. 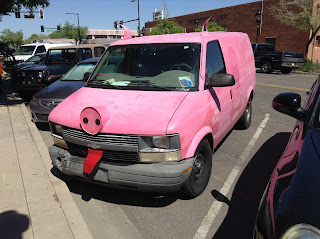 Later, there was a stretched, bent Hummer parked in front of Safeway. A Latinx bride, groom, and wedding party, all in formal attire, wandered the aisles.

And our neighborhood rooster has been sleeping in, and not crowing until after eight a.m.


I know that this sounds like notes for the script for a surrealistic art film that's maybe a little too derivative of Un Chien Andalou, but that's the world we're living in. Reality doesn't care if it doesn't make sense. And it doesn't give a damn about aesthetics.

At least we aren't buried up to our waists in the sand, being devoured by insects. Yet. 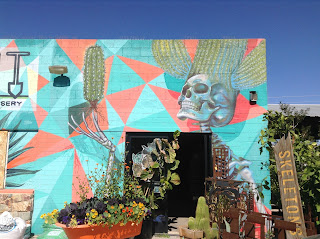