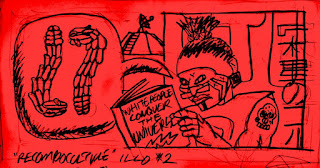 And what about five years from now?

My interest in science fiction has always been fused with futurism. I cut my teeth on cheap, sleazy sci-fi productions that usually began with a nuclear explosion and a preamble about how, in a world of nuclear weapons, flying saucers, satellites, juvenile delinquents, and beatniks, anything was possible.

Or Chriswell's intro to Plan 9 from Outer Space:

"We are all interested in the future, for that is where you and I are going to spend the rest of our lives."

It's just as true now as it was then.

I just love the wild fantasies/ripped from todays' headlines connection. A long time ago, in a galaxy far, far away just doesn't pack the same punch. When you lose the futurism, it's just make-believe in funny clothes, a sanitized-for-your-protection safe zone.

One of my all-time favorite books is called Dangerous Visions.

In my adolescence, I was into Buckminster Fuller and Marshall McLuhan, as well as Ray Bradbury and Harlan Ellison. Then around the time of the first moon landing, I read Michael Moorcock's The Final Programme and Alvin Toffler's Future Shock. My ideas of the future would never be the same.

Even though Ray Bradbury said that Toffler stole it all from every science fiction writer out there, Future Shock showed me that the future wasn't what they said it was back in the fifties. The Final Programme did the same thing in New Wave fictional form. “The future ain't what it used to be,” as Yogi Berra said, and it never is. It keeps changing, updating, mutating. 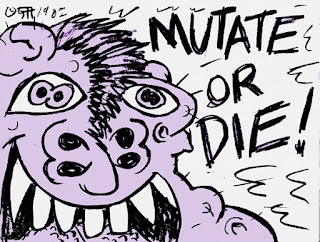 Back then, the future was a product cooked up by white guys in white lab coats who worked for Union Carbide, Monsanto, IBM or some other such corporation. We were expected to buy it like good consumers. No use in arguing -- here it is; live with it.

But that was a long time ago. Now we're in the age of Afrofuturism, Chicanafuturism, and other futurisms being born as you read this. It's like what William Gibson said about “the street finds its own uses for things.” Now it's not only finding its own uses, but inventing new things on its own.

Gibson also said that “The future is already here – it's just not very evenly distributed.” It used to be that if you wandered away from the world's overdeveloped hot spots, you were traveling back in time, but that has changed. The playing field isn't quite level, but the future can now come from anywhere, you're local ghetto/barrio, Mexico City,
Lagos,Timbuktu, Nairobi, Kathmandu, Hanoi . . . 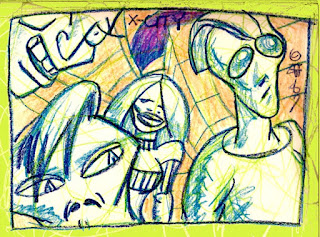 And it's not about one, singular future. Futures and futurisms are busting out all over the planet – and maybe beyond. You can pick and choose. Support the futurism of your choice.

Or better yet, assemble some randomly selected parts and custom-build them into a recombocultural Frankenstein monster that will send shock waves through the universe.