My eye was snagged by a Tweet about an novel with an ancient high-tech civilization in Africa that was written in 1902 by a black woman. I clicked on the link and investigated right away – and it was a good thing, because, even though I retweeted it, time has gone by the social media has been vomiting up stuff for about a week, and I can't find it! Good thing I've somehow become savvy enough to download the ePub version from Archive.org with the OCR-generated typos and the snippets of other stuff from the magazine because this was an unedited scan.

Even though it was a static-encrusted signal coming in on a weird fuzzed out station, I was hooked. I read and enjoyed and otherwise had my mind properly blown by Of One Blood, Or, The Hidden Self (yes, the sci-fi is plugged into identity) by Pauline E. Hopkins. It was only later that I found out it was available in an edited form.

The best things seem to come to me wrapped up in a weird adventure. Either that, or I'm just doomed to do everything the hard way. 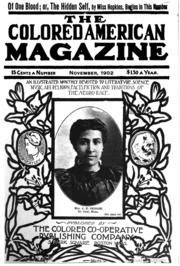 Of One Blood was originally serialized in The Colored American Magazine, the first African American monthly, "devoted to literature, science, music, art, religion, facts, fiction and traditions of the Negro Race," from December 1902 to January 1903. The magazine was established by Pauline E. Hopkins in 1900. She was the editor until 1904 when Booker T. Washington purchased it in a hostile takeover. Seems that some folks thought that Hopkins was too much of a radical.

Hopkins was a journalist, playwright, and historian as well as writer and editor. She pioneered using what would now be called popular genre fiction to explore social and racial themes, not just in Of One Blood, but also in her other novels:

The Contending Forces: A Romance of Negro Life North and South

Winona: A Tale of Negro Life in the South and Southwest

All four of which are available in one volume.

Of One Blood, being over a century old, has a steampunkish appeal, is proto-Afrofuturist, dealing with mesmerism, mediumistic powers, a cataleptic trance, and astral projection (we'd call these paranormal these days, but this was before the term science fiction was coined) and a fantastic, advanced lost civilization in the city of Meroe, in Ethiopia.

If that doesn't sound sci-fi enough for you, there's telepathy-powered television!

It begins with Reuel Briggs, “a young medical student interested in mysticism” who sees Dianthe Lusk, a Negro singer and “the owner of a mysterious face” and falls in love with her. I hesitate to tell much of the plot, or identify some characters by race. Some are identified as white in the beginning turn out be what we'd now call black. This is a “lost race” story, the subgenre pioneered by H. Rider Haggard in King Solomon's Mines and She, but in this case, the lost race is the entire human race, originating in Africa. Blacks and whites are all of one blood.

Which allows a love triangle to turn out to be both incestuous and interracial.

This was over a generation before José Vasconcelos published his mestiaje manifesto La Raza Cosmica.

Of One Blood is a novel from the past that can still shake things up in the 21st century.

For more information, check out the Pauline Elizabeth Hopkins Society.