The Krell chip must have been malfunctioning.

"What do you mean, I'm doing it?" I said out loud. "I can't fly a helicopter! I'm not even anywhere near the controls!"

Saguaros giggled out of cyberspace.

"With the chip you can do it with half your brain tied behind your back," Califia said as she removed the televoodoo war helmet, her obsidian eyes flashing like supernovae.

"Your mind isn't the only thing going on in your brain," Obie put his arms around her, "especially with you, now."

"The technology now obeys you." Vampiko leaned into me, flattening out her implants.

"I'm not sure where I end and the technology begins," I said taking hold of her for comfort.

"First you get a chip in your brain," Doc said as Lalaita decreetly swallowed and zipped up his fly for him, "then MTV does Dead at 21, in which their kid with a chip in his brain thinks someone's ripping off his life and making it into a comic book."
"Maybe it's the wave of the future," said Obie, "the world filling up with kids with chips in their brains, running for their lives."

"That new black magic's got me in its spell,"  Lalaita sang as Doc gnawed on her shoulder.

"Maybe I should sue somebody." My hand was swallowed by Vampiko's artificial paradise. The chip rattled off entities that I could sue.

Obie took his tongue out from the hole in Califia's stretched-out ear lobe.  "Don't bother with governments -- they aren't in control any more."

"They haven't been for a long time."  Califia smiled.  She obviously had her teeth filed to points in Nigeria.

"There are more things on heaven and earth than talked about on the Internet," Vampiko whispered, her fangs brushing my ear.

I noticed that high above us, a spy satellite was tracking me. Reaching through the chip, I turned off its stabilizers, and could soon see it flaming past a porthole, disintegrating high over Phoenix.  With this I didn't need virtual reality. Like my father once told me:  "The street can be cyberspace for people who have lives.”

And did I ever have a life now.

"This is serious brainpan fallout," I said.

"It's what's left after you blow your mind," I said.

"A tasty world," said the chip. 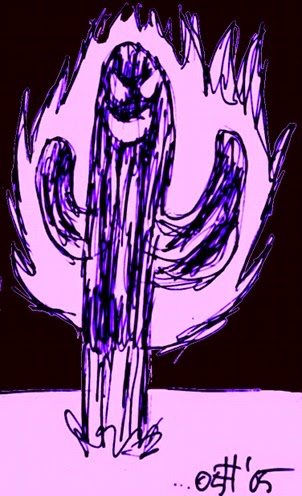