LEPRECON, AND OTHER WEIRD RITES OF SPRING

Zap! Suddenly, it's springtime in the Metro Phoenix Area. The temperature is rising. Ultraviolet radiation is making everything glow with brighter colors. My wife's garden is dazzling, making Xochiquetzal proud.

And, oh yes, Easter and LepreCon happened on the same weekend. I did my best to follow the weird rituals going on around the world as well as attend the con. As usual, I leapt from world to world. There were mind-altering side-effects.

The trend of fewer fans – and fewer of them who seem to be readers -- continued. No audience showed up for my first two panels. It was common for panel participants to outnumber the crowd.

This meant that I got to talk and hang out with Guest of Honor Joe Haldeman and his wife Gay, and lot of the other writers, which was good, fun, and informative. There were self-published – or should I say “indie” – authors, and people from small presses, in the dealer room. When it came to publishing, the phrase “brave new world” kept coming up – at least it's not “nineteen eighty-four” or “Fahrenheit 451.”

I did my autograph session in the company of Jennifer Roberson. Collectors – they're still around – had me autograph copies of 18th annual Year's Best Science Fiction (with Obsidan Harvest, my collaboration with Rick Cook), and Alien Contact. I even managed to sell copy of Smoking Mirror Blues.

Nobody bought any of the copies of 2020 Visions that Rick Novy brought. If you don't have it, you really should. You don't want to miss the rollicking Victor Theremin adventure, Radiation is Groovy, Kill the Pigs. There's also stories by Emily Devenport, Jack Mangan, David Lee Summers, and more writers than you can shake a wad of radioactive marijuana at. 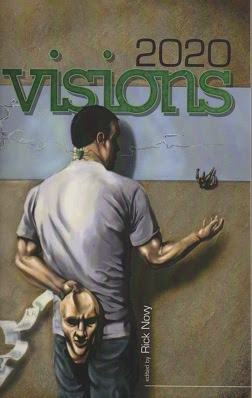 When I commuted home, I went online to cherez le weird. There were lots of bloody penitentes, but nothing as outrageous as the flaying and wearing the skin of a sacrifice to Xipe Totec, but it comes close at times. There's something delightful to me about a crown-of-thorns vendor, or costumed spectators getting out their cell phones to take pictures of Jesus carrying the Cross. In Australia the Roman armor is replaced with modern police gear. And more reenactments, by light-skinned, English-speaking people are taking place in the United States of America!

The real-nails crucifixions in the Philippines still have the power to shock. I'm amazed that no one seems to notice that those crucified don't bleed. Why isn't medical science studying this?

When I went back to the convention, all the weird Easter stuff started giving me ideas for my science fiction – maybe for marketing's sake, I should call it dystopian – bullfighting novel: a glorious, bizarre string of visions that I had to scribble down. It's coming alive, growing my brain. I'm going to have to start writing it now. There's no choice.

Yeah, it's the sort of thing that nobody in the big-time publishing world would touch with ten-foot pole, but they're doomed. They don't matter anymore. Writers no longer have to listen to them. The world will be better for it. Readers rejoice.

I guess you say I was inspired. It might not have happened if I wasn't talking to writers and thinking about writing.

Besides, at one point, as I was taking a stroll around the block, a young woman in a restaurant patio called out, “Excuse me, sir, is there a con going on around here?”

And a guy who described himself as a “documentary freak” asked me about my Latinopia.com / Barrio Dog Productions T-shirt.

So as I left the purple Easter Bunny giving people high-fives in front of the Mill Avenue post office to go home to videos of burning Judases and Resurrection Sunday bullfights, with a monster of creativity in my head.

I guess that's what conventions are for.