FROM ATOMIC GRASS TO GROOVY RADIATION 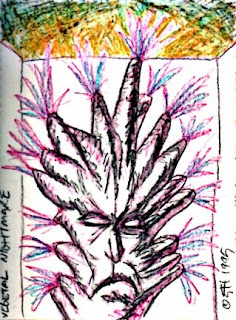 Some folks like stories that are easy to follow. Not me. I prefer to jump on a story's back, give it a taste of my spurs, hang on for dear life, and see where the hell it takes me. If it's a wild ride, I'm happy.

“Radiation is Groovy, Kill the Pigs” was a wild ride from the git-go, and that was just writing it.

It started out totally different -- shorter, in a different genre, with another title: “Atomic Grass.”

I even wrote it like a true professional, with a specific market in mind: Murdaland: Crime Fiction for the 21st Century. No sci-fi here. I was out to write noir for the new millennium! A few years earlier I heard a security expert joke about the easiest way to smuggle plutonium into the country was to hide it inside a bale of marijuana. And I was collecting bits and pieces about the border situation. Throw in some post-modern Chicanos, and there it was – a new kinda noir!

Unfortunately, Murdaland folded before they could even get around to rejecting “Atomic Grass.”

Undaunted, I sent it to other classy markets – even The New Yorker. But soon there were no more markets.

Instead of getting depressed, I noticed that there are a lot science fiction markets these days, and I was finding it easier to sell to them. I got the fiendish idea of sci-fizing the story. Besides, I had gathered more bits and pieces about the border conflict, had some ideas about the singularity issue -- and then there was Victor Theremin.

I created Victor in a story called “Human Sacrifice for Fun and Profit” that can still be purchased in James Palmer's Voices for the Cure anthology. Then I sold “Hindenburg's Vimana Joyride” to Jetse de Vries' DayBreak Magazine. It was a case of a character taking on a life of his own. He also acts as catalyst for my imagination. I plugged him into “Atomic Grass” and – KERBLAMMO!

Also, by this time I had given up on commercial considerations. Writing for The Market failed for me. Besides, The Market was changing with new technology and social configurations. The Market didn't know what it wanted.

On the other hand, I was curious about what kind of wild ride I could get.

And what a ride it was! I generated the line, “radiation is groovy, kill the pigs,” which screamed to be the title. And the border war gave me more bits and pieces.

I also developed my idea of creating mad scientists as gonzo heroes for our age – when I was a kid watching monster movies, I identified with the guys who made the monsters. I know scientists, they tend to go mad, but not that way they do in the movies. I try to encourage their madness. It just might save the world.

And yes, Edgar Rice Harrison is a tribute to Paul Riddell, though don't expect any more resemblance between the two of them than there is between Victor Theremin and me. After all, this is fiction, and the whole point is for it to come to life, wreak havoc on the environment, and provide a wild ride.

And I've managed to publish it! Thanks to the Rick Novy and the folks at M-Brane Press, you can get it in 2020 Visions through Amazon.That means that the ride has just begun. Hang on, it's going to be wild!